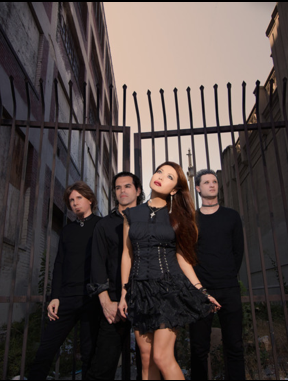 Dig Jelly is a Los Angeles based female-fronted high energy modern rock band unlike anyone, versatile yet grounded in its signature sound.

Dig Jelly’s mind blowing live show is filled with raw energy and sex appeal and it demonstrates the band’s unmistakable chemistry and musicianship. They have an “in your face” attitude and impressive showmanship on stage that is well received.

Dig Jelly has done National Tours opening for Veruca Salt, and The Lovemakers of Interscope. Show after show has proven to be a testament to their hard work and dedication.

The strong support they get from their home state has helped the songs, “Communication” and “Faka Laka Rocksta” from their latest release “ParaNoize”, get added to high rotations on 98 KUPD and climb to the “top 25 most played” on KWSS 106.7.

Dig Jelly has been consistently entertaining packed crowds throughout California and Arizona.

In 2007 Dig Jelly had built two full on protool recording/rehearsal studios both in Los Angeles and Orange County where they continue to record their new material.